Around two thousand supporters, family members and government officials were on the tarmac at Harare airport to welcome Mugabe's remains.

The body of Zimbabwe's ex-president, Robert Mugabe, arrived home on Wednesday for burial in a country divided over the legacy of a former liberation hero whose 37-year rule was marked by repression and economic ruin.

Mugabe, a guerrilla leader who rose to power after Zimbabwe's independence from Britain and governed until he was ousted by the military in 2017, died on Friday in Singapore, aged 95.

His health deteriorated after he was toppled by the army and former loyalists in November 2017, ending an increasingly iron-fisted rule during which he crushed his opponents.

Around two thousand supporters, family members and government officials were on the tarmac at Harare airport to welcome Mugabe's remains as they arrived by charter flight from Singapore, an AFP reporter at the scene said. 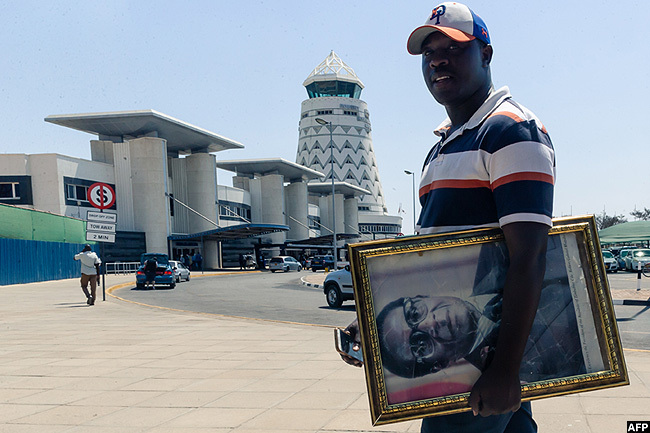 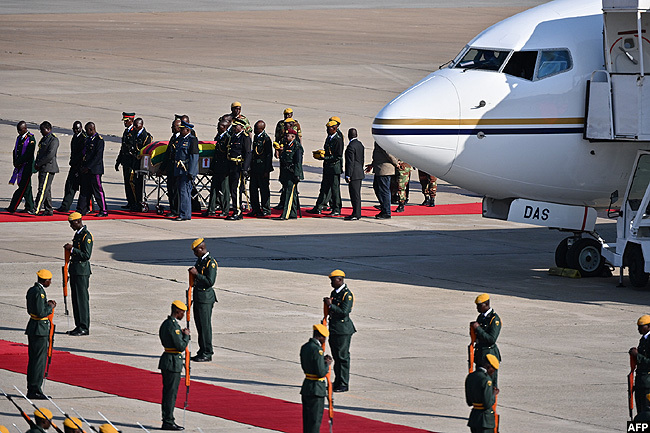 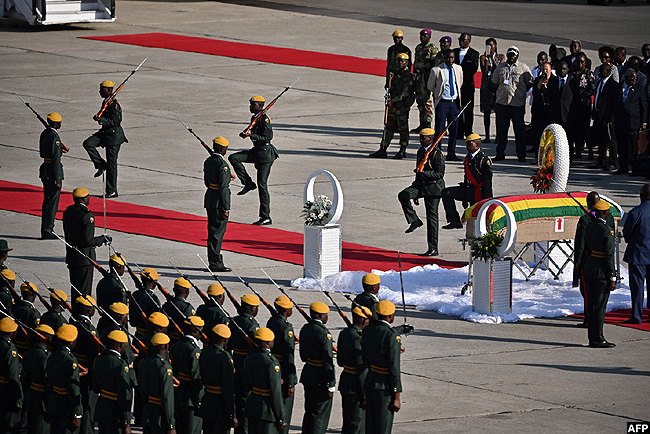 Zimbabwean soldiers performed during the eleborate ceremony on the airport's tarmac 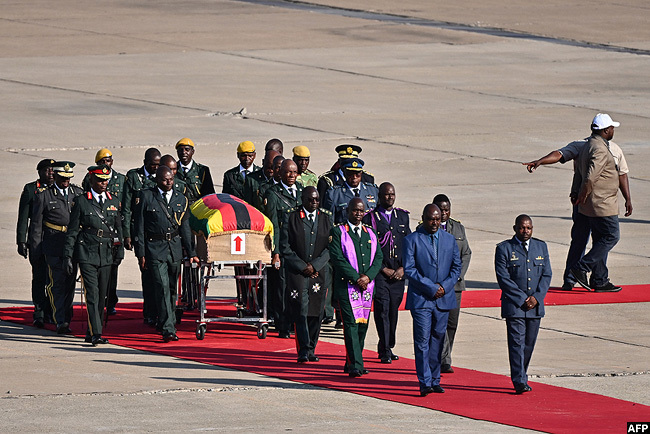 Mugabe's remains arrived in a country divided over his legacy

Soldiers stood guard along a red carpet as military officers walked solemnly with the coffin drapped in the green, gold, black and red national flag.

Mugabe died on a medical trip to Singapore, where he had been travelling regularly for treatment. A delegation including Vice President Kembo Mohadi headed to the affluent city-state on a chartered flight to bring him home.

The body will be taken to Mugabe's private Harare residence, known as the Blue Roof, for the night. It will be laid out for the public to pay their respects in Rufaro stadium on Thursday, before heading to his homestead Zvimba.

Mugabe's final burial place on Sunday, though, is still unclear.

His family and President Emmerson Mnangagwa's government are apparently at odds over whether it would be at his homestead northwest of Harare or at a shrine for liberation heroes in the capital.


RELATED: Mugabe an icon of liberation, a pan-Africanist 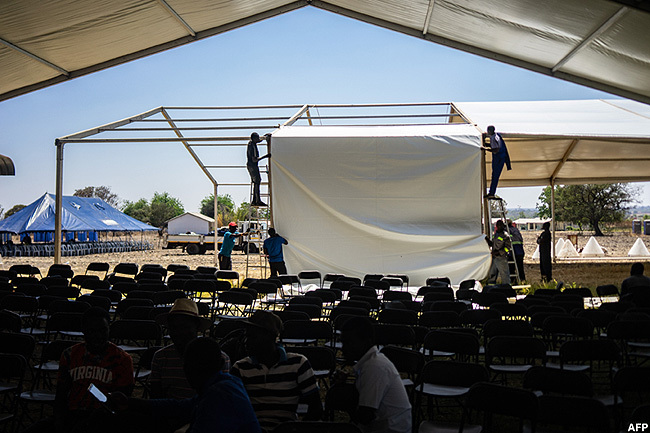 Workers put up tents at Mugabe's family home in Kutama, 80 km northwest of Harare ahead of the arrival of his body back to the country

From hero to tyrant

At home, Zimbabweans have been divided over how to mourn a man once hailed for ridding the former British colony Rhodesia of white-minority rule but who later purged his foes in a campaign of massacres and executions known as the Gukurahundi.

His increasingly tyrannical leadership and economic mismanagement prompted millions to flee a country crippled by hyper-inflation and shortages of food, drugs and fuel.

Following his death, Mnangagwa announced Mugabe had been declared a "national hero", flags flew at half mast across Harare and news of his passing was splashed across newspaper front pages.


RELATED: Why did Mugabe spend his last days in Singapore? 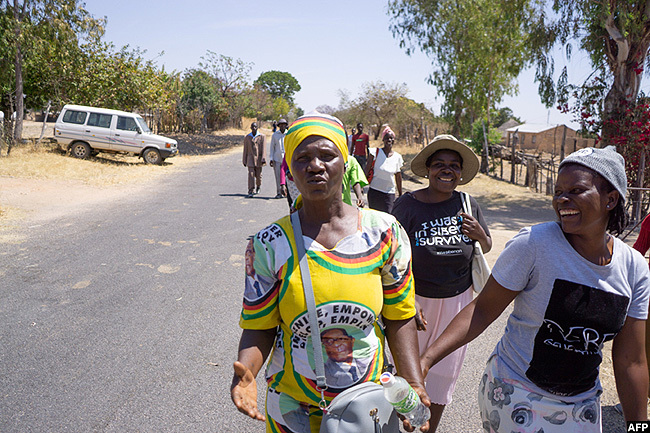 Meanwhile, residents made their way to the Mugabe on Wednesday 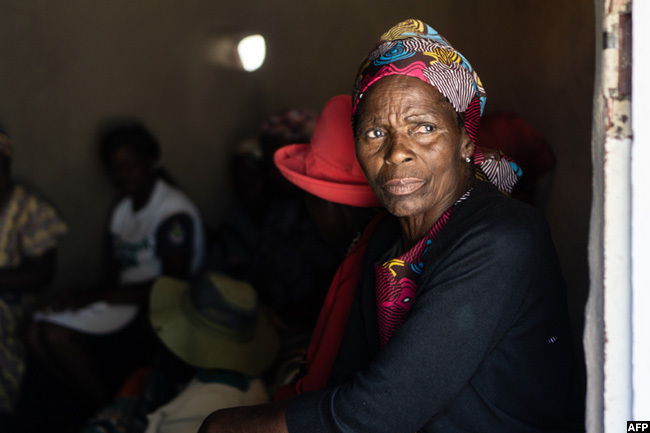 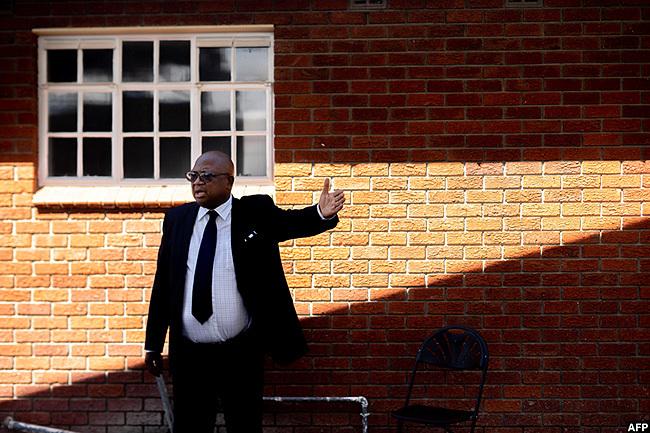 On Thursday and Friday the body will lie in state at Rufaro Stadium in Mbare township in Harare for the public to pay their final respects. Officials plan to bus people in from the provinces to attend.

The 35,000-seat stadium is where Mugabe took his oath of office at a colourful ceremony when colonial Rhodesian Prime Minister Ian Smith handed over the reins of the country.

There Mugabe hoisted the new Zimbabwe flag and lit the independence flame on April 18, 1980 -- bringing hope for a new era after a long guerrilla war.

The official funeral will take place on Saturday, at the giant 60,000-seat National Sports Stadium in Harare, where foreign leaders will attend.

A relative has said that in line with native Shona customs, traditional chiefs from Zvimba will have a final say on where the former leader will be buried.