They claim that on April 19, this year, the Police without justifiable reasons indefinitely suspended their Kyarenga Extra concerts

Bobi Wine was detained by the Police on Easter after he defied orders not to proceed to his One Love Beach in Busaabala where one of the concerts was slated to take place. Photo by Ashraf Kasirye

They claim that on April 19, this year, the Police without justifiable reasons indefinitely suspended their Kyarenga Extra concerts

A group of music promoters have petitioned court seeking orders restraining Police from blocking their concerts.

Abby Musinguzi and Andrew Mukasa claim that the indefinite suspension of concerts involving Kyadondo East MP Robert Kyagulanyi aka Bobi Wine has not only caused them irreparable loss but is also illegal and amounts to an abuse of power.

Musinguzi is the proprietor of Abtex Productions while Mukasa is the managing director of Bajjo Events and Marketing Agency Ltd.

In a suit lodged at the Civil Division of the High Court on Tuesday, they claim that on April 19, the Police without justifiable reasons indefinitely suspended their Kyarenga Extra concerts despite fulfilling all the requirements imposed on them.

According to Musinguzi, they were required to produce clearance to use the intended venues, a detailed program for each activity, ambulance facilities and a list of performers at each venue which they allegedly fulfilled on time but the Police went ahead to stop their concerts.

The Inspector General of Police, Martin Okoth Ochola, and the Attorney General William Byaruhanga have been listed as the respondents in the matter.

The duo who filed the case through Lukwago & Company Advocates, contends that the Police directive on the concerts was made in violation of their right to a fair hearing guaranteed under Article 28, 42 and 44 of the Constitution.

They want the court to issue an order of mandamus directing the Police to provide security at their concerts instead of blocking them. 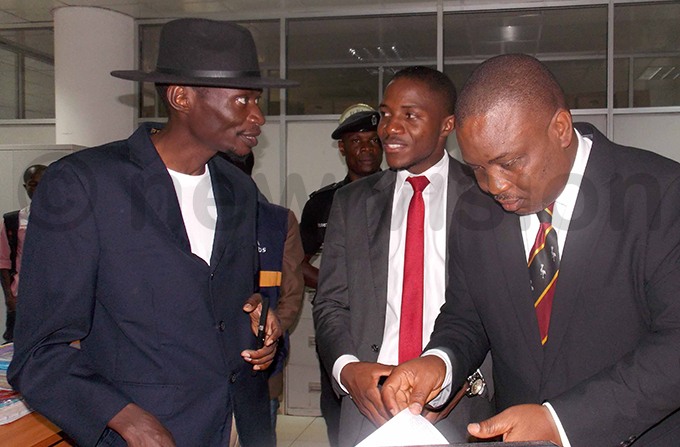 Abby Musinguzi of Abtex Productions (left) and lawyer Erias Lukwago (right) filing paperwork at the registry of the civil division of the High Court. Photo by Michael Odeng

They claim that they entered into an agreement with Bobi Wine to perform at their concerts at a cost of sh230m and made an advanced non-refundable payment to him but couldn't hold the concerts due to the Police's impugned directives.

"On March 25, 2019, we wrote to the IGP requesting for security at the said concerts as required under the law. The IGP wrote back to us setting out conditions we should fulfill before our concerts could be cleared. We fulfilled the conditions but we were upset when on April 19 he directed us to immediately suspend them without advancing any reason to that effect," Musinguzi contends.

They also want the court to declare that their arrest and detention by the Police without an allegedly genuine cause at Busabala Beach on April 22, 2019, amounted to the violation of their right to carry out business contrary to Articles 20, 23 and 40 of the Constitution.

According to their lawyer Erias Lukwago, the conduct of the Police throughout the entire process was fraught with irrationality, illegal, tainted with procedural impropriety, made in bad faith and amounted to the violation of the applicant's freedom to liberty and economic rights guaranteed under the Constitution.

Lukwago says that the petitioners are not obliged under the law to seek Police clearance under the Public Order Management Act but only to inform it about their event.

Musinguzi explained that their major aim is not about getting damages but enforcement of their human rights as Ugandans.

"We have not come here majorly for money but the protection of our rights by the court. If the court finds that we deserve damages, it will be its discretion," Musinguzi noted.

The court's deputy registrar Sarah Langa Siu has given the IGP and the AG 15 days to file their defence against the allegations.

Kenya's election court case: what you need to know