As it happened: Uganda Today - Tuesday Feb...
Next Story

Army officer, 2 others sentenced to 14 years over acid attack

Councilor Amos Katurebe, an acid attack survivor in hospital where he is receiving treatment (Photo by Adolf Ayoreka)

MBARARA- The chief magistrate court in Mbarara presided over by Samuel Twakire on Monday convicted and sentenced an army officer, Denis Bataringaya a brother to municipal speaker, Bony Tashobya, Don Kizito Baryayesima, 44 from Ishongoro in Ibanda, Mbaine Emmanuel, 32 a boda boda cyclist from Nyakayojo division over pouring acid on  Amos Katurebe an LC5 councilor representing  Nyamityobora ward with an intent to finish off his life.

Court heard that on the night of  November 8, 2017, Katurebe while on his way home on Mile two, Mbarara -Masaka Road at around 10:00pm was attacked and acid poured to  his face before they rushed him to Mayanja Memorial Hospital, from where he was rushed to Mengo Hospital where he spent almost a year in intensive care unit.

Police with other sister security organisations mounted an operation, the next morning and arrested Bonny Tashobya Karusya, speaker for Mbarara Municipality, and others who were subsequently arrested.

Ssali Geofrey,28 who took himself to Police in Kampala, upon trial in May 2018 pleaded guilty and was sentenced to 20 years in prison.

However before conviction, Ssali narrated how his co-accused Bataringaya alias Boy D attached to 5,5 battalion fourth division in Gulu, Kiiza and Mbaine contacted him for a deal of which was to pour acid to Katurebe and agreed to pay him sh20m upon completion of the "deal." 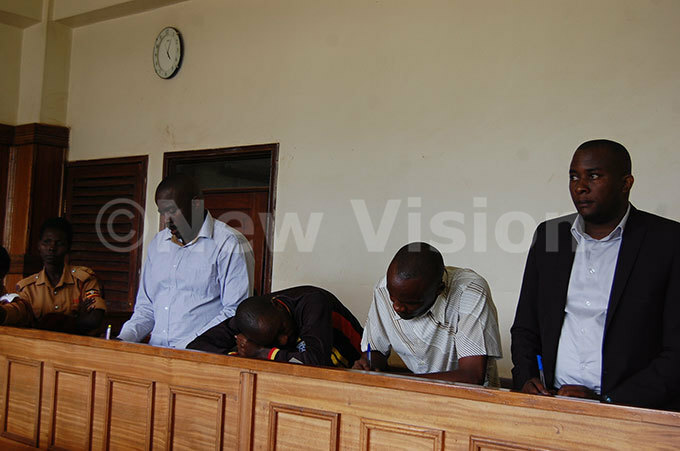 While reading the judgment, Chief Magistrate Twakire noted with concern that during the submissions of evidence for both prosecution and defence and those of witnesses, that he found evidences of Ssali collaborating with the witnesses presented by prosecution.

However there was no evidence proving that Tashobya, the speaker participated in the committing of the offence.

"Court finds that it has been proved beyond reasonable doubt that the accused, Don Kizito, Ssali Geofrey, Mbaine Emmanuel and Denis Bataringaya participated in committing this case, and accused number one Bonny Tashobya apart from the mentioned political wrangles he had with councilor Katurebe there was no proof pinning him to have participated in the case, so he is found not guilty and  therefore Tashobya is acquitted. And others are found guilty and are convicted".

Before Twakire read the sentence, Prosecution prayed that the convicts be given a harsh sentence since cases of acid are rampant so as to a send a signal to the public.

Lawyers from defence led by Enock Twinamatsiko who represented Kizito and Mbaine prayed that the convicts are first time offenders with no criminal record and that they are sole bread winners in their respective families, he prayed for lenient sentence.

A lawyer representing, Bataringaya prayed, "since Bataringaya is a first time offender and an army officer whose services are still needed in the country, a sole bread winner in his family and is still in his youthful age, a law abiding citizen, I pray that he should be granted a lenient sentence since he has been on remand for one year and one month.

The chief magistrate listened to both prayers from prosecution and defence lawyers and ruled that, "section 204 of the penal code Act puts the maximum sentence at life imprisonment and I agree that acid cases are rampant and serious, this should send a strong signal to  the public.

He further told the convicts that they have a right to appeal the sentence from the higher court.

Poline Kyarikunda, the wife to councilor Katurebe expressed her dissatisfaction with the ruling since Tashobya whom they suspected to have planned the whole deal, was acquitted.

It should be noted that by the time they poured acid on Katurebe, he was chairing a committee that was soliciting signatures to censor speaker Tashobya accusing him of incompetence, misuse of office and poor administration.

On the morning of his attack, he was supposed to testify before the commission of inquiry into land matters led by Justice Catherine Bamugemererire that was at Ntare School over sale of government land where Tashobya was also accused.