US releases 2017 report on its funding activities in Uganda

KAMPALA - The United States Mission in Kampala has released its second annual report in a row detailing how and why its government funded five key sectors in Uganda in 2017.

According to the breakdown, the health sector took the lion's share of the US spending on Uganda in 2017. The sector received sh1.9 trillion.

The US spent sh215.7b to promote a prosperous Uganda, sh1.3 trillion to promote stability, sh48.8b to enhance a just and democratic Uganda and sh72.5b to promote an inclusive, educated and empowered Uganda.

While launching the report, the US Ambassador to Uganda Deborah Malac noted that "the best people to explain the impact of our work are Ugandans themselves, so this report shares stories from the people whose lives have benefited from the US programmes."

Malac also noted that the results of their funding are a result of the partnership between her country and the people of Uganda.

The US relationship with Uganda started in 1962 when the latter got its independence. The report says that since then the two counties have enjoyed a mutual relationship.

In the Agricultural sector which is the backbone of Uganda, the report observes that the US initiatives to increase agricultural productivity are strengthening Uganda's economy, helping more farmers and their families prosper, and improving food security throughout the country.

"Youth leadership for agriculture (YLA), a project supported through Feed the Future, is working to expand economic opportunities for Ugandan female and male youth, ages 10-35, in agricultural related field," the report said. 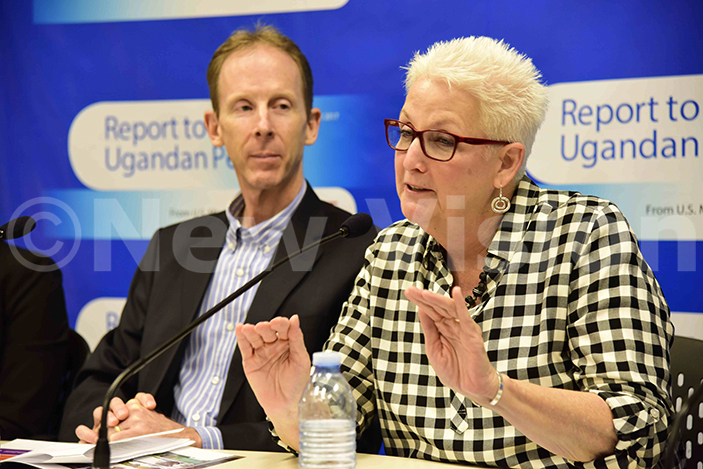 On the security side, the report stated that the US partners with Uganda to promote peace and stability in the country and throughout East Africa.

But if there is any sector that the US government is much interested in is the health sector. Ambassador Malac noted that the major aim of the US funding to Uganda is ensuring that young persons have a better future.

She noted that creating opportunity for the young people starts with ensuring that they are healthy and hence the reason the sector is the most prioritised.

In 2017, President's Emergency Plan for AIDs Relief (PEPFAR) an innitiave of the US government provided life-saving antiretroviral treatment services and support to more than 993,000 Ugandans.

"Nearly 60 percent of Ugandans living with HIV achieved viral load suppression, which has been shown to reduce onward transmission by 96 percent and is a maker of important progress in controlling the HIV epidemic," the report said.

"Through the US President's Malaria Initiative (PMI), we provide assistance that enables more Ugandans to access effective methods for controlling and preventing malaria."

The report noted that last year, PMI distributed more than one million insecticide-treated nets to families including 200,000 to protect pregnant women.