All eyes on Salah as Russia take on Egypt

The Liverpool wizard missed his team's defeat to Uruguay on Friday

The Liverpool wizard missed his team's defeat to Uruguay on Friday

PIC: Mohamed Salah's shoulder has continued to cause him problems in Russia. (AFP)

World Cup hosts Russia face an Egypt side buoyed by the likely return of star man Mohamed Salah on Tuesday knowing a win will all but guarantee a place in the last 16.

Liverpool wizard Salah missed his team's defeat to Uruguay on Friday as he struggles to recover from the shoulder injury sustained during last month's Champions League Final.

Salah's shoulder has continued to cause him problems in Russia, and last weekend he needed the help of three team-mates to put a shirt on during a training session.

However the 26-year-old is desperate to start in what is a must-win game on Tuesday for the Pharoahs, who are playing in the World Cup for the first time since 1990.

Russia coach Stanislav Cherchesov was bullish ahead of the match in Saint Petersburg that his team can rein in the explosive striker.

"We know how to play against him," he said. "We are ready to stop Salah and we will."

Russia got the 2018 World Cup off to the perfect start Thursday with a 5-0 thrashing of Saudi Arabia, but are under no illusions that the seven-time African champions with Salah pose an altogether tougher test.

"Egypt's game with Salah is different from the one they play without him," forward Alexei Miranchuk said.

Salah, already a national hero after his 94th-minute penalty clinched a 2-1 win over Congo to send Egypt to their first World Cup since 1990, has been declared 100 percent fit by the team doctor. 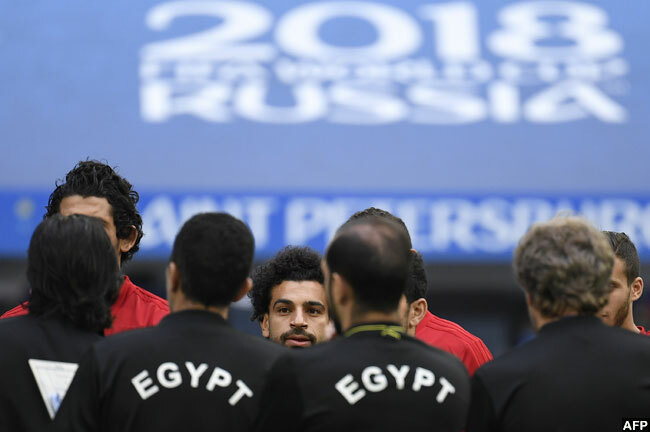 Without Salah, Egypt lacked bite in their 1-0 opening loss to Uruguay.

But if fully fit, the sight of Salah, who scored 44 goals in a remarkable debut season at Liverpool, will strike fear into the Russians.

Also on Tuesday, Robert Lewandowski and Sadio Mane face off in a mouthwatering World Cup shootout between two of European football's most lethal forwards as Poland take on Senegal.

Eighth-ranked Poland enter their Group H opener at Moscow's Spartak Stadium as favourites led by Bayern Munich's Lewandowski who netted 41 times in all competitions this season.

After a disappointing showing at the Euros in France two years ago, the forward said he was entering the tournament in a different frame of mind from 2016.

"I'm sure that training will be better now and that I'll be fresh and dynamic at the right time," he said. "I started preparing for the World Cup much earlier."

Tuesday's early game sees Colombia take on Japan in Saransk, four years after pounding the Asians 4-1 at the 2014 World Cup.

The South Americans have their own injury concern in the form of Brazil top scorer James Rodriguez, with the Bayern midfielder nursing a calf strain.

Japan's build up to Russia has been tumultuous, after coach Vahid Halilhodzic was sacked in April despite steering the team to the finals. 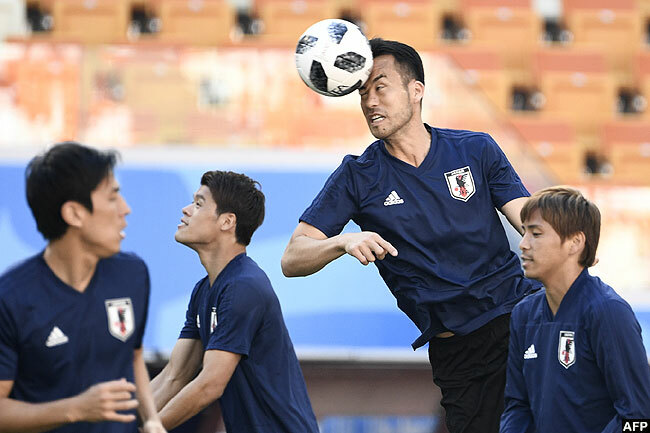 Tuesday's round of fixtures will mean that all 32 teams in the tournament have now played at least once.

On Monday, England made hard work of a 2-1 win over Tunisia in Volgograd, relying on an injury-time Harry Kane header to spare their blushes.

Captain Kane put the Three Lions ahead on 11 minutes from close range but Tunisia levelled through a first-half Ferjani Sassi penalty.

"Credit to the lads, they kept going, kept going to the last second," Kane said after the final whistle.

"I am absolutely buzzing, everyone on the staff is. It shows good character to get the job done."

Belgium laboured against the South Americans in the first half but opened their 2018 account with a stunning Dries Mertens volley.

"That first goal was going to be essential," said Martinez. "It is almost a mental blow for one team and it gives you a lot of breathing space for your first game in the tournament," said coach Roberto Martinez.