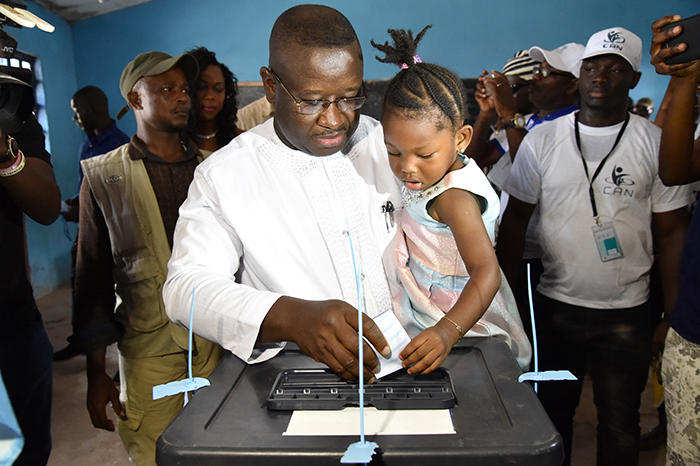 SIERRA LEONE - The handpicked successor of Sierra Leone's outgoing president and a former coup leader faced off in the final round of a delayed run-off presidential election Saturday after a campaign marked by verbal sparring, sporadic violence and a last-minute legal battle.

AFP reporters said turnout appeared lower in Saturday's vote some two hours before polls were due to close at 1700 GMT, although this was not officially confirmed.

"I am disappointed with the voter turnout due to many armed military and police at polling centres," Bio, a former army officer who led a 1996 coup before handing power to a civilian administration, said as he voted in the capital Freetown.

But Bio, 53, said voting appeared peaceful and added he found the process to be "fair, transparent and credible".

He was credited with 43.3 percent to 42.7 for Kamara -- a margin of just 15,000 votes -- after the March 7 first round in the West African country where political loyalties are often divided along ethnic lines and traumatic memories of the 1991-2002 civil war run deep.

The government said the tight security was to ensure a peaceful poll but the opposition feared it could dissuade some supporters from turning out.

"I am put off by all these armed men around the polling stations," 19-year-old first time voter Mohamed Sesay told AFP.

Others resolved to make their voices heard.

"We are sure there is  infrastructure development but the human development is zero. That's what I voted for," said engineer Lansana Idrissa Daramy.

Isatu Jalloh, a trader, added: "I voted for education, because most of our kids when they finish school, it's difficult for them to get jobs. So I want jobs and I want education," a subject which Bio says he will prioritise.

A total of 3.1 million people were registered to vote in the first presidential poll since a 2014-2016 Ebola outbreak which killed 4,000 people.

One of the world's poorest nations despite huge metals and diamond deposits, Sierra Leone is recovering only gradually from war and disease. Its economy remains in a fragile state with corruption widespread in the former British colony.

An economist by training, Kamara, 66, was foreign minister until last year when he stepped down to pursue the presidency under the APC flag, despite lacking strong party support.

He has promised to deliver improvements in health, education and infrastructure.

'Too close to call'

"The race is too close to call," Edmond Abu, director of the Native Consortium and Research Center, told AFP on Friday.

The key to victory lies with whoever wins Kono, a diamond-rich district in the east of the country generally regarded as a "swing state," Abu said.

Andrew Lavalie, director of the Institute for Governance Reform, suggested the SLPP could do well in Kono and Freetown, pointing to a number of "protest" votes.

The runoff had been scheduled for last Tuesday but was delayed so the High Court could hear an APC complaint of ballot tampering.

The court lifted an injunction on Monday, but the National Electoral Commission said it needed four extra days for preparation.

Bio has blasted the government's closeness to China, while Kamara is presenting himself as a continuity candidate.

The campaign has been characterised by ugly verbal exchanges and sporadic violence with Bio accusing the APC of using police intimidation against his party.

Police have reported a string of attacks on candidates and supporters on both sides since the first round after which Kamara declared that "the safety and security of Sierra Leone is in our hands."