The court directs the accused to report to the army court registrar, Maj. John Bizimana, twice a month.

The court directs the accused to report to the army court registrar, Maj. John Bizimana, twice a month.

PIC: Military police officers in the dock at the Makindye General Court Martial as their lawyer Caleb Alaka speaks to Lt Gen. Andrew Gutti, chairman of the court on Tuesday. (Credit: Badru Katumba)

KAMPALA - The army court on Tuesday released on bail three police officers, out of seven who are accused of kidnap.

A seven-member panel of the General Court Martial chaired by Lt Gen. Andrew Gutti released on bail each of the accused on sh10m not cash. Their sureties were also charged sh5m not cash.

Those granted bail are detective assistant superintendent of Police James Magada, special Police constable Faisal Katende and detective corporal Amon Kwarisima on grounds that they are high and junior-ranking officers, who can neither interfere with investigations nor influence witnesses.

"Although the sureties of the accused are not substantial, they are not capable of interfering with investigations," Gutti ruled.

The court directed the accused to report to the army court registrar, Maj. John Bizimana twice a month and never to travel outside Kampala and Wakiso districts without court's permission.

"Failure by the accused to abide by court terms and conditions will automatically lead to cancellation of their bail," Gutti warned.

Others include Benon Atwebembeire, Abel Tumukunde, Abdulnul Ssemujju aka Minana, a Rwandan, Rene Rutagungira (an army officer from Rwanda), and a Congolese, Pacifique Bahati Muhlgenga aka Ilunga Monga. 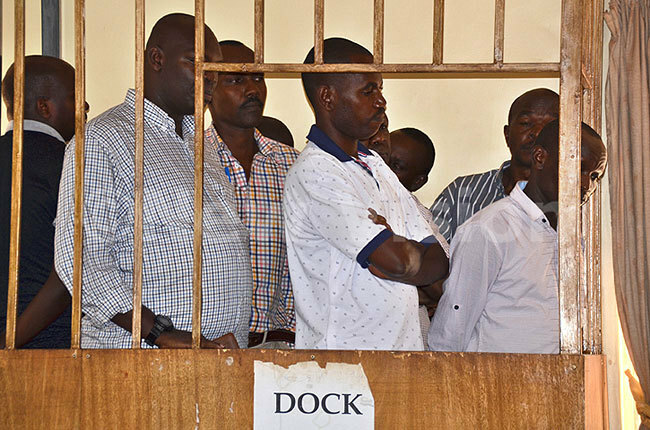 The suspects in the dock. (Credit: Badru Katumba)

The remaining officers and the three civilian suspects have been sent back on remand at Luzira Prison and Makindye Military Police barracks, respectively until February 5, pending investigations.

The army court last month declined to release on bail Aguma on grounds that being a high-ranking officer, he has capacity to influence witnesses and interfere with investigations.

This prompted Aguma to run to the criminal division of the High Court to reapply for bail while Agasirwe petitioned the same court's civil division, seeking an order compelling the army court to set him free as he is not an army officer to be subjected to military law.

Prosecution, led by Maj. Raphael Mugisha, alleges that the nine accused persons unlawfully kidnapped Jackson Kalemera aka Ndinga and Lt Joel Mutabazi and delivered to Rwanda without their consent.

Mutabazi was a former bodyguard of President Paul Kagame of Rwanda.

Prosecution states that on October 25, 2013, at Kamengo in Mpigi district along the Kampala-Masaka road, while in unlawful possession of firearms and grenades, ordinarily a monopoly of the Uganda People's Defence Forces (UPDF), the accused persons conveyed Kalemera and Mutabazi to Rwanda.

It is further alleged that Agasirwe and Ssemujju on August 13, 2013 in Lukole village Bajjo Parish Nyimbwa sub-county Bombo, Luwero district, while armed with firearms and grenades, conveyed Vincent Kaliisa without his consent to Rwanda.

Tell her about menstruation

Holiday parenting: Dealing with changes in your child