Sh235m car up for grabs in the Singleton G...
Next Story

City Oilers celebrate winning the 2017 FUBA league after a 4-0 series win over the KIU Titans at Lugogo on January 12 2018. PHOTOS: Michael Nsubuga

When local basketball giants City Oilers made a long arm for a fifth successive NBL men's title, not many people doubted their ability inspite of enduring a consuming season with Zone 5 and Africa Club Championships on the menu.

True to their winning culture, Jimmy Enabu and Co  landed the title following an exhaustive 4-0 clean sweep of first time finalists KIU Titans in the best of seven series. 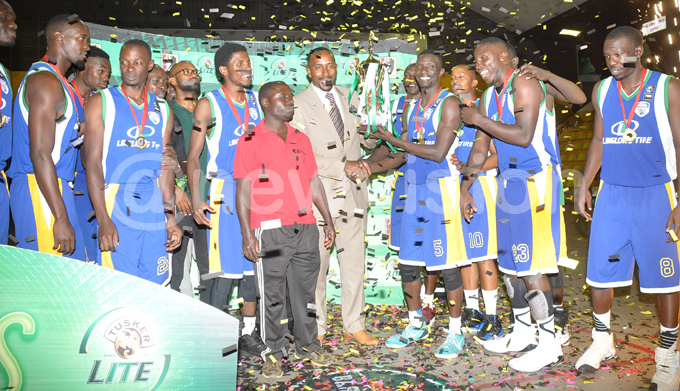 In a crucial game four Friday at lugogo indoor stadium, Steven Omony propelled his new side to a 68-60 win. A big player for a big moment! He scored a game high 22 points.

To make sense out of the win, it confirmed a history rewrite by the affluent club. Last season, they became the first team to win four titles in a row. They have now beaten their own record by winning the fifth. Simply sublime!

"The boys have delivered yet another land mark victory. I surely take pride in them. We have come a long way. Such achievements are a boost to our ambitions of parlaying the same success on the continent" Mandy juruni, coach of city oilers said.

All said, the title was no easy come for the Oilers as KIU Titans gave a fair challenge. They lost all the games on a slender margin. A visibly sobbing Chris Omanye scored 18 points in game four as the Titans fought back.

Meanwhile, Landry Ndikumana was selected the MVP Of the playoffs. He scored 9 points in game four.

In the end the fans remained loyal to the game as overwhelming numbers were maintained through out the series.

Impact of COVID-19 on private sector, agribusiness in Uganda

Fake inputs: Are the laws too weak?