2017 PLE results to be released Friday
Next Story

The male candidates have beaten their female counterparts in the 2017 Primary Leaving Examinations (PLE).

The male candidates have beaten their female counterparts in the 2017 Primary Leaving Examinations (PLE).

KAMPALA - The Minister of Education and Sports, Janet Museveni, has ordered all schools to stop setting pre-registration tests or examinations for candidates.

The minister issued the directive in her remarks shortly before releasing the 2017 Primary Leaving Examinations (PLE) results at the Office of the Prime Minister in Kampala on Friday.

The outcome showed that although there were more girls registered to sit the final exams than boys last year, the male candidates still generally beat their female counterparts in performance.

General performance in 2017 improved compared to the previous year, the results also indicated.

Minister Museveni said schools should not stop at having more girls registered for the final exams. "We should also get quuality performance of girls," she told ministry and school officials, lawmakers and reporters.

She hailed districts such as Arua, Moyo and Adjumani, which are refugee-hosting communities, for realising increased registration in 2017. The education minister said it was testimony that refugees in the country are enabled access to education and other social services.

One of the ways you can get your results is by sending a text message through your phone. Type PLE, leave a space, then your full registration number and send to 6600.

She said examiners were generally paid on time, which explains why the results of 2017 were released on the same date as the previous year's, despite a greater candidature last year. 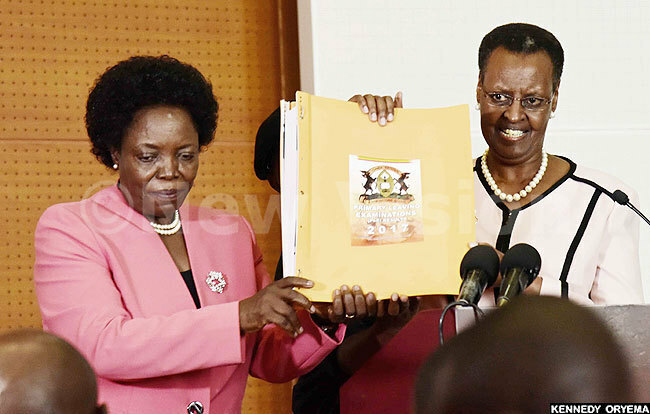 Okwakol said perfomance had improved and that more will be done by the ministry and other stakeholders to ensure the bar is raised even higher.

Examiners  reported that candidates are writing and expressing themselves better than previously.

On the downside, however, it was revealed that exam malpractice is still soiling the examination process.

Okwakol said while security was ramped up last year, UNEB still received cases of exam malpractice, a vice she said continues to be a threat "to the sanctity of the institutions" and which will be seen as also being a threat to national security.

As many as 2,559 results were withheld, pending completion of investigations. Those cleared will have their results given to them.

The UNEB chief said the reported cases will be scrutinised by the body's security committee as part of the ongoing investigations.

As one of the counter measures, starting this year, Okwakol revealed, the distribution of PLE exams will be manned by security personnel right from the storage stations to the sitting centres, which will "call for additional resources".

"I condemn exam malpractices, as they threaten the very core of our moral society," Minister Museveni said.

"We will ostracise such teachers or their associates by naming and shaming them," she added, saying the vice will reduce the country's competitiveness globally, as well as affect the quality and standard of human resource.

Okwakol was also keen to emphasise that the UNEB communication policy does not provide for issuing of communication through social media.

She was responding to reports that circulated several days ago on social media platforms over the release of PLE exams, which were "amplified by media houses" and caused "confusion and anxiety".

Meanwhile, UNEB executive secretary Dan Nkorach Odongo said there was a gradual reduction in the number of candidates who register and fail to sit exams. Last year's 2.3% rate of abseentism was the lowest, he said.

However, some districts, such as Gomba (5.9%), had absenteeism rates above the national average.

For subject performance, there was a decline in the performance in English, with the distinctions dropping from 11.5% to 4.5%.

There was significant improvement in SST (Social Studies) and Science. Overall, pass rate rose to 86.9% up from 85.6% the previous year.

For Mathematics, there was improvement at the credit and overall level.

In the English and Mathematics exams, candidates performed poorly in questions where they had to use acquired knowledge. In English, learners struggled to write freely. For example, they were asked to write a letter of apology, at which many found difficulty.

Candidates were more comfortable with questions that are direct.

However, there is a bright side to the story. Examiners said there was improved layout of work. Handwriting was better and candidates answered in full sentences, regardless of whether the answers were correct or not.

Odongo said the PLE performance in 2017 was better than in 2016 "except at Division One level". There was a slight drop in the performance in Maths and English as well.

Also, there were fewer candidates ungraded this time round (9.1%) than the previous year (13.0%).

"More learners have qualified to move on to the next level (secondary)," Odongo said.

The failure rate stood at 9.1%. It was also revealed that districts from the eastern part of Uganda, such as Bukwo and Kween, performed way below the national average.

Non-Universal Primary Education (Non-UPE) schools, which are found in urban areas, continued to outshine their UPE counterparts. But for the UPE schools in urban areas, the performance was no different from that of the non-UPE primary institutions.

Odongo urged district offices to give schools the reports on the performance of candidates to enable institutions study and engineer ways of how to improve education.

While the education minister hailed the teachers for their efforts in marking of the exams in time, which led to the timely release of results, she urged them to "reform the methods of teaching" so that learners apply the knowledge gained.

She said the education ministry has made efforts to improve performance through various interventions and initiatives. The Global Partnership for Education (GEP) is one such intervention.

The ministry also organised meetings with district education stakeholders in especially poor-performing areas, such as Sembabule, Buvuma and Kalangala.

Mrs Museveni said the district education officers (DEOs) have been provided with motorcycles "to intensify" effective supervision in schools. However, she said some district leaders had reportedly diverted the means of transport to other work.

But the interventions are still very few, the minister stressed. More needs to be done.

All stakeholders must be involved in improving the education in the country. Faith-based institutions, politicians, parents, teachers and district leaders have a role to play, Mrs Museveni said.

"MPs should interest themselves in visiting schools in their constituents and then share their findings" during their meetings in Parliament, the minister urged.

She congratulated the Police and other security agencies for their support in the exams process and also the candidates for completing this stage of their education journey.

Meanwhile, the selection process for Senior One will be held on January 24 and 25 at the Uganda Manufacturers' Association (UMA), Lugogo in  Kampala.

Baby with extra limbs was meant to be Siamese twin