Former Archbishop of Church of Uganda Livingstone Mpalanyi Nkoyoyo, 79, is fittingly laid to rest at the Uganda Martyrs Museum, Namugongo.

Former Archbishop of Church of Uganda Livingstone Mpalanyi Nkoyoyo, 79, is fittingly laid to rest at the Uganda Martyrs Museum, Namugongo.

PIC: At the burial of former Archbishop Nkoyoyo at Namugongo on Tuesday. (Credit: Abou Kisige)

Rather than harbour a sombre mood, the state funeral of Nkoyoyo carried a general air of celebration of a man described in glowing terms.

Buganda Kingdom prime minister Charles Peter Mayiga said successful people should not be mourned when they die, but rather be celebrated.

Nkoyoyo, 79, was fittingly laid to rest at the Uganda Martyrs Museum, Namugongo.

At the final sendoff on Tuesday, Bishop Kityo Luwalira of Namirembe Diocese, told mourners that Nkoyoyo "had a special connection with Namugongo" and that he had committed to building the Uganda Martyrs Museum at Namugongo.

After the funeral service at around 3:30pm local time, the Uganda flag-draped casket carrying Nkoyoyo's remains was gently wheeled to the burial site, with the Uganda Police band leading the procession.

Members of the clergy and other mourners followed, softly singing hymns.

Once at the site, a prayer was held, after which the hymn Amazze Omulimo Gwe was sang as the coffin was lowered into the grave.

Archbishop Stanley Ntagali then led the mourners into prayers at the burial site. 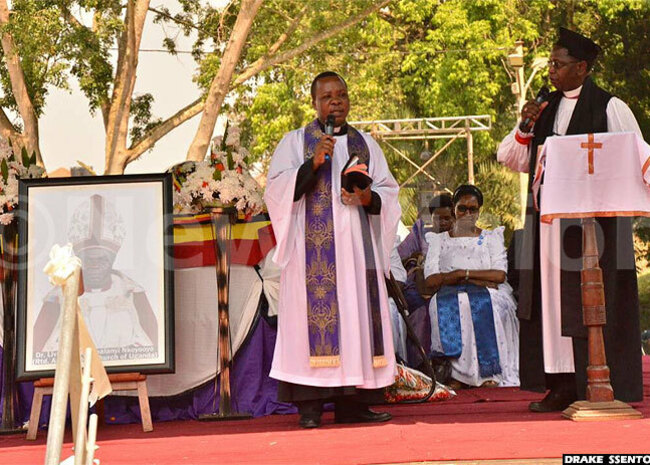 Earlier, on Monday, state minister for works Katumba Wamala told the congregation at St Phillip and Andrew's Cathedral in Mukono that he met Nkoyoyo at Kampala Hospital the day before his death and one of the things they talked about was the museum.

"When I arrived at the hospital, my brother rose from his bed and our discussion began. It centred on the museum and the stability of Uganda," he said.

Uganda Martyrs Museum, Namugongo is the brainchild of Nkoyoyo, who embarked  on the project after retiring as Archbishop of the Church of Uganda.

However, the construction of the museum suffered setbacks when the cleric suffered from cancer of the throat last year. He stayed in the UK for months until he recovered and returned to Uganda.

On his return, even before fully recovering, the determined Nkoyoyo embarked on the project.

Such was how close at heart the museum was to Nkoyoyo.

President Yoweri has promised to accomplish Nkoyoyo's unfinished missions, including the museum.

Canon Samuel Wasswa, who is Nkoyoyo's former driver, revealed that his former boss wanted his grave built to the standard of the museum to serve as another tourist attraction.

Nkoyoyo was the first bishop of Mukono Diocese, which was carved out of Namirembe in 1984.

Glowing tributes: Nkoyoyo 'a blessing to all'

The widow, Ruth Nkoyoyo, described her husband as a true and honest Mulokole (born-again Christian), who served his God with all his heart. 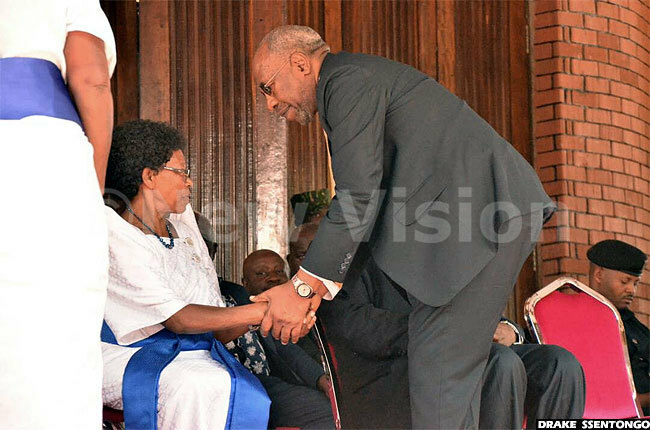 During his funeral, speakers said Nkoyoyo always emphasised the the virtue of keeping time. They also hailed the former archbishop for being development-minded and down to earth.

Former army commander Wamala described Nkoyoyo as a hardworking person, who once lectured him about investment.

Ntagali said the fallen cleric was a mentor for many in the Church, including himself. "We are celebrating the life of a great man who has been called by his creator."

"The man we are say farewell today was not only a blessing to his family, but also to the Church and to the nation."

Luwalira said Nkoyoyo was a peaceful and humble servant of God, "who devoted all his life to the ministry of the Lord and the service of humanity". He said he was a preacher full of "strength and charisma".

Archbishop Dr Cyprian Kizito Lwanga described Nkoyoyo as an exemplary prelate, who personified the Christian virtues of faith, hope and charity. He said Nkoyoyo worked to see everyone around him climb out of poverty.

The Kabaka, Ronald Muwenda Mutebi, praised the late cleric for loving the kindgom and for giving moral and material support towards its revival.

The Mufti of Uganda, Sheikh Shaban Ramadhan Mubajje, represented the Inter-Religious Council of Uganda (IRCU) at the final sendoff of Nkoyoyo and applauded the late for being among those that started IRCU.

The chairperson of the House of Clergy, Rev. Canon Nelson Kaweesa, said all clergy in the country have lost a "special friend" who preached hard work, patience and resilience.