US apologises to Japan over repeated milit...
Next Story

"The people have a strong desire to see the North and South move toward peace and reconciliation," one of the delegates said.

"The people have a strong desire to see the North and South move toward peace and reconciliation," one of the delegates said.

Members of the South Korea delegation (left) talk with members of the North Korean delegation (right) during their meeting at the border truce village of Panmunjom in the demilitarised Zone dividing the two Koreas on January 9, 2018.(AFP)

SOUTH KOREA - North and South Korea began their first official talks in more than two years on Tuesday, focussing on the forthcoming Winter Olympics after months of tensions over Pyongyang's nuclear weapons programme.

The talks in Panmunjom, the truce village in the Demilitarized Zone that divides the peninsula, came after the North's leader Kim Jong-Un indicated in his New Year's speech that he could send a delegation to next month's Games in Pyeongchang in the South.

Seoul responded with an offer of a high-level dialogue and last week the hotline between the neighbours was restored after being suspended for almost two years.

Seoul's five-member delegation, led by unification minister Cho Myoung-Gyon, travelled to Panmunjom in a convoy of vehicles, passing a group of well-wishers holding a banner at a checkpoint leading towards the DMZ.

The North's group, of similar size and led by senior official Ri Son-Gwon, walked over the Military Demarcation Line at Panmunjom for the talks, pictures showed -- just yards from where a defector ran across in a hail of bullets two months ago.

Looking businesslike, Cho and Ri shook hands at the entrance to the Peace House, the building on the southern side where the discussions were being held, and again across the table.

In accordance with standard practice in the North, Ri wore a badge on his left lapel bearing an image of the country's founding father Kim Il-Sung and his son and successor Kim Jong-Il. Cho also wore a lapel badge, depicting the South Korean flag.

"Let us present the people with a precious new year's gift," said the North's Ri. "There is a saying that a journey taken by two lasts longer than the one travelled alone."

Cho told him that Seoul believed the Pyeongchang Games "will become a peace olympics as most valuable guests from the North are going to join many others from all around the world".

"The people have a strong desire to see the North and South move toward peace and reconciliation," he added. 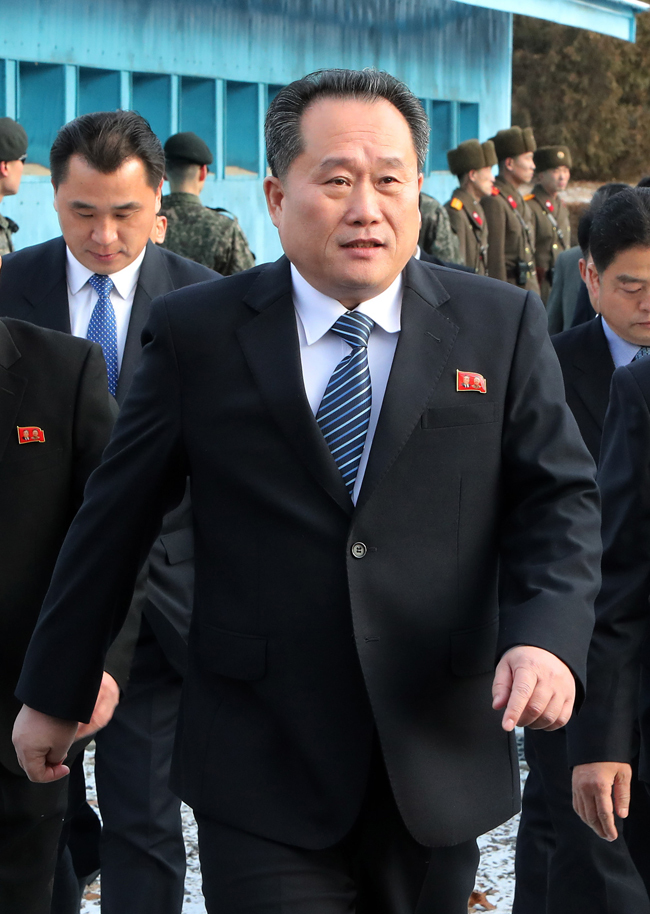 North Korean chief delegate Ri Son-Gwon (centre) and his delegation cross the border line to attend an inter-Korea talks at the border truce village of Panmunjom in the Demilitarized Zone dividing the two Koreas on January 9, 2018.

'Peace olympics'
It was a radically different tone from the rhetoric of recent months, which have seen Kim and US President Donald Trump trade personal insults and bellicose threats of war, while Pyongyang has launched missiles capable of reaching the US mainland and carried out its sixth and most powerful nuclear test to date.

Seoul has been keen to proclaim the Games in Pyeongchang, just 80km (50 miles) south of the DMZ, as a "peace Olympics" in the wake of missile and nuclear tests by the North, but it needs Pyongyang to attend to make the description meaningful.

If the North agrees, one of the top agenda items will be whether the two Koreas' sportspeople make joint entrances to the opening and closing ceremonies, as they did for Sydney 2000, Athens 2004 and the 2006 Winter Games in Turin.

The size and membership of the North Korean delegation and their accommodation -- widely expected to be paid for by Seoul -- will also be discussed.

The group may stay on a cruise ship in Sokcho, about an hour's drive from the olympic venue, which would enable their movements to be closely monitored and controlled.

With only two winter sports athletes qualified, North Korea is likely to bolster its presence by sending significant numbers of cheerleaders to the Pyeongchang Games, which run from February 9 to 25, analysts say.

Hundreds of young, female North Korean cheerleaders have created a buzz at three previous international sporting events in the South.

"For North Korea to achieve its desired effects and to attract attention, it will have to dispatch its beauty cheering squad," said An Chan-Il, a defector-turned-researcher who heads the World Institute for North Korea Studies.

South Korean reports have suggested the North could send a high-level delegation to the games, including Kim's younger sister Yo-Jong, who is a senior member of the ruling Workers' Party.

'Beyond the Olympics'
As well as the olympics, the two sides could bring up their own priority issues, which analysts say will be much more challenging.

South Korea wants to discuss the resumption of family reunions, but Pyongyang snubbed previous offers, saying it will not consider further reunions unless several of its citizens are returned by the South.

The North will probably want to discuss a permanent end to large-scale annual military drills between Seoul and Washington.

The US and South Korea agreed last week to delay the Foal Eagle and Key Resolve exercises until after the games, apparently to help ease nerves.

Trump said at the weekend he hoped the rare talks between the two Koreas would go "beyond the Olympics" and that Washington could join the process at a later stage.

But US ambassador to the United Nations Nikki Haley said that there was "no turnaround" in the US stance, reiterating that the North must stop nuclear tests for talks with Washington.