Johannesburg suffocates in shadow of mine ...
Next Story

“It fetches more money,” he said. “My colleagues are selling the variety at sh2,200 per kilo, compared to sh800 for the local ones.”

“It fetches more money,” he said. “My colleagues are selling the variety at sh2,200 per kilo, compared to sh800 for the local ones.”

UGANDA - There is a new type of millet in the country. Experts say it is a better variety because it matures within 65 days, much faster than the local landraces, which mature at 90 to 120 days. Like the local variety it produces seed at the top although with much longer patches of seed, giving farmers more yield.

It is known as Foxtail millet. And it is from China. Farmers in the northern districts of Lira and Oyam are already growing the millet as Government carries out multiple evaluations across the country to test its performance in the different ecological zones. After that it will be rolled out across the country.

Dr Godfrey Sseruwu, a plant breeder at Mukono Zonal Agricultural and Research Development Institute (MUZARDI) who worked on the variety in 2010 says it was first introduced to the agriculture ministry by Victoria Sekitoleko, a former agriculture minister who was working with the Food Agriculture Organization. She saw the millet in China perform better than our varieties when she worked for the FAO in 2010.

The ministry introduced the millet to the National Agricultural Research Organization (NARO).

“I worked on the variety with some success from 2010-2011 at MUZARDI, and I can confirm to you that the variety is high yielding, producing two tonnes/ha against the local varieties that struggle to make 1.5 tonness/tons,” Seruwu said

“Maturing fast enables it to escape the vagaries of nature such as drought, which are rampant these days. The porridge from the millet also taste better.”

The millet is well below a hybrid Foxtail variety developed by Zhangzagu Academy of Science which yield up to 12tonnes/ha. 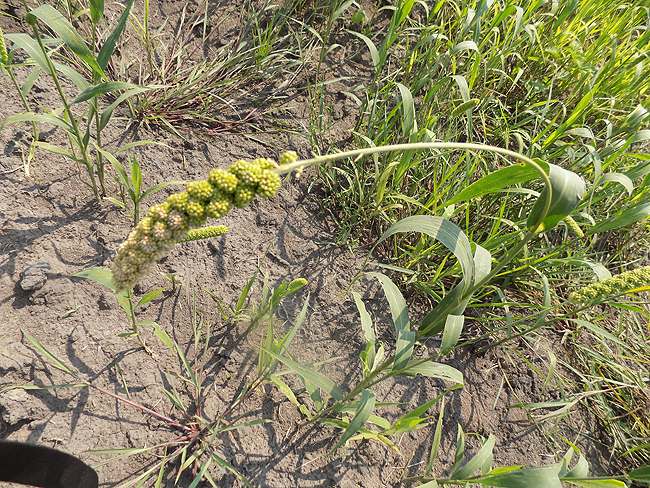 The new variety has longer patches of seed

New millet in Oyam, Lira
A private Chinese company Kehong, which is part of Zoeve Seed in Luweero, is also involved in this millet research and promoting it in northern Uganda.

Kehong was able to fasttrack the research and avail seed to farmers in Oyam and Lira through a local community organization called Initiative Community Empowerment and Support (ICES).

According to Cheery Shu, the country representative of Zoeve Seed, foxtail millet is an important food crop in fighting food insecurity not only in Uganda but across Africa because of its quick maturity.

Zoeve Seed are in Uganda under the China Uganda South –South Cooperation Project.  Wu Zhiping, team leader at China-Uganda South -South Cooperation in Kampala says investments in crops like foxtail are in line with the cooperation’s aim of helping to improve agricultural production and productivity in the developing world, including Uganda.

Perfromance in China
Prof. Zhao Zhihai of the Zhangjiakou Academy of Sciences and considered the father of Foxtail millet in China, told New Vision during his recent visit to Uganda that the crop was regaining its top position as a staple in China up there with maize and rice.

The Chinese had moved away from millet as its population increased and maize and rice provided better yields for the increasing population. But with better technology, Chinese breeders have been able to increase production and the crop is again starting to become a staple.

It is used for making porridge (whole grain) and alcohol processing (wine/ spirits).Zhihai says they have been eating the millet for over 8,000 years and they make many products from it, including porridge, vermicelli and thin millet cake. Others are millet yellow wine, millet pot, millet crisp and millet nutrition milk. 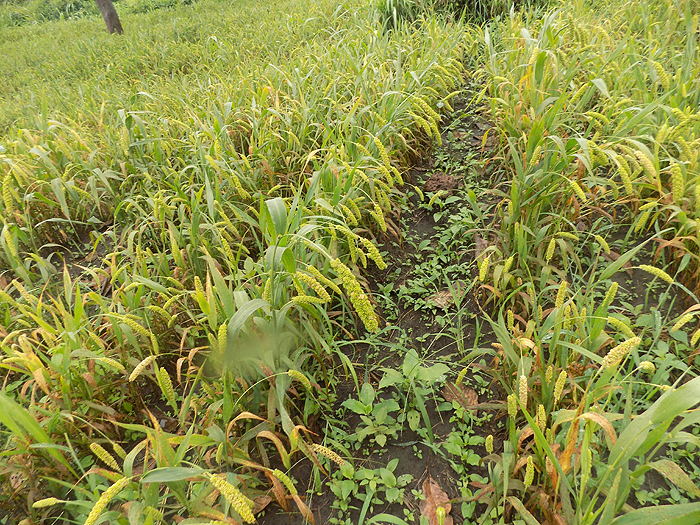 Will local varieties survive?
Asked how the Foxtail variety is going to affect the local varieties, Dr Opolot Okaasai, the director of crop resources in the Ministry of Agriculture, Animal Industry and Fisheries, said priority is on fighting food insecurity and malnutrition in the country.

“It is fast-maturing and high- yielding, “he said. “We have to feed our people.”

Okaasai cited Karamoja region, which is water-stressed and known for chronic food shortages, saying the Government was in the process of fast-tracking and popularising the millet variety there.

“We are also working with local scientists to see how we can incorporate some of the new millet genes in the local varieties to get the benefits from the traditional varieties,” he said.

Okaasai said while local varieties may not compete with the new millet, Ugandans should rest assured that the local varieties would not be left to disappear, but would be preserved in gene banks for future use, he said.

Taste of foxtail millet porridge
Before writing this story, I was tasked to cook and test this porridge. It was necessary to compare the taste and cooking process with the local millet. I am a millet man. I grew up in Buhweju, a millet county. I sowed, weeded and harvested millet.

Millet was to us as what wheat is to the British or rice to the Japanese. We ate it, drank it and we had seasons and rituals revolving around it. It was the non-negotiable part of the menu at celebrations such as weddings, funerals and Christmas. So when I visited Kehong in June and I was given a 2kg pack of Foxtail, I brought them home and looked for Veronica Kyomuhangi, a millet woman I have known since childhood. She lives in Rugarama in Bwenjule, Mbarara district.

So early December, I visited her so that we would taste this new millet. But, before I left Kampala for Mbarara, I called her.

“When are you bringing me the sample so that I can plant?,” she inquired.

I found Kyomuhangi ready to taste the millet. She milled the millet on the grinding stone, then made a millet paste in the Kinyankore way; some flour and adding cold water to make a thick paste.

Kyomuhangi then boiled the water, which she poured in the plastic cup and mixed.

The yellowish mixture was not concentrated like she had expected, the way traditional millet does.

“Let us put it on the fire,” she suggested as she kept stirring the porridge just like it is done for maize porridge and it worked. In a few seconds it was thick.

“Kano obuhunga,” she said in Runyankore, laughing after seeing the thick porridge. Tasting affirmed her surmise.

The porridge was closer to maize porridge than to millet. 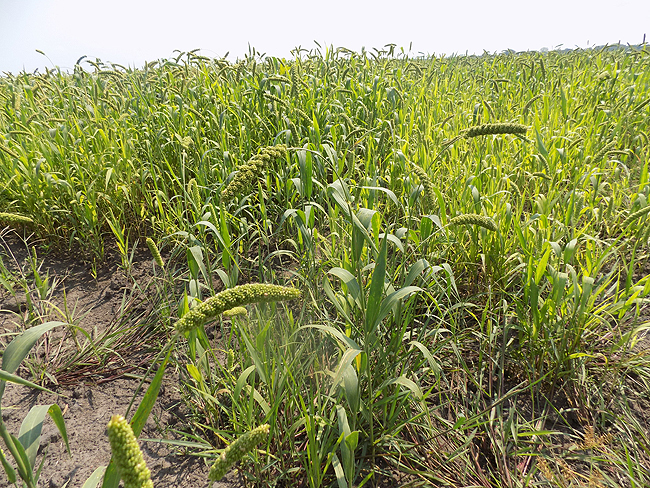 “They have realised that to dominate people, they need to control their mind, language and taste of food,” he said to a group of African youth attending the Pan African Youth Forum 2017 at Speke Resort, Munyonyo.

“Why are there many foreign restaurants in African towns, Indian and Chinese restaurants?”

“And the fear of the new millet erasing the traditional one is real, especially in Ankole, where the people are quick adopters. We never used to have bananas. My late grandfather brought banana suckers from Buganda, where he was a labourer in his teens and we planted them. Soon, banana (matooke) became a staple in Ankole.”

Would the new variety displace the traditional millet that had fed these people for generations? Would it make porridge and bread?

Market performance
James and his wife Janet have planted two acres of the new millet in Barcalo A, Wairo, Oyam district in northern Uganda.

“It fetches more money,” he said. “My colleagues are selling this new variety at sh2,200 compared to sh800 for the local varieties.”

Felix Ajal, the executive director of ICES, an organisation involved in promotion of the Chinese variety, said farmers can get up to between 800 and 1,000kg per acre with the right seeds and fertilisers.

Charles Olir, another farmer in Wirao, Oyam, concurs, saying he is looking to two acres the coming season after he missed getting seeds for the current season. He adds that his first season did not go well after the sun proved too much for the variety to withstand. He agrees that there is a ready market for the millet.

“It is marketable. It is good and easy to sell,” Olir said.

Cheery Shu, the country representative of Zoeve Seed, asaid Kehong would buy any Foxtail millet produced in the country.

Okaasai told Saturday Vision that farm field trials are being conducted in the districts of Butaleja, Masindi and Lira.

“The variety will then be rolled out to the farmers,” he said.