Suspended MPs at court for hearing

The suspended MPs, who include Gerald Karuhanga and Allan Ssewanyana, want court to declare the Speaker's decision unlawful and set it aside.

The suspended MPs, who include Gerald Karuhanga and Allan Ssewanyana, want court to declare the Speaker's decision unlawful and set it aside.

The MPs that were suspended from Parliament in court Wednesday morning. (Credit: Meddie Musisi)

KAMPALA - The Leader of Opposition in Parliament, Winfred Kiiza, and   some of the suspended Members of Parliament arrived at the High Court in Kampala Wednesday morning, for hearing of the case in which the Speaker of Parliament is expected to defend herself over the suspension of the legislators.

Speaker Rebecca Kadaga suspended the MPs during the debate to lift the presidential age limit. The Bill has since been passed by Parliament and was signed into law by President Yoweri Museveni on December 27.

They were suspended for a period equivalent to seven sittings for misconduct.

Last week, the presiding judge, Margaret Oguli Oumo, issued fresh summons against the Speaker and the Attorney General, William Byaruhanga, after they failed to show up in court.

Also present at court were supporters of the ruling National Resistance Movement (NRM), who feel they equally need to attend and follow the court proceedings.

The NRM supporters, who stood outside court, held placards with messages in support of Kadaga's decision to suspend the MPs, arguing that she did so in accordance with the law. 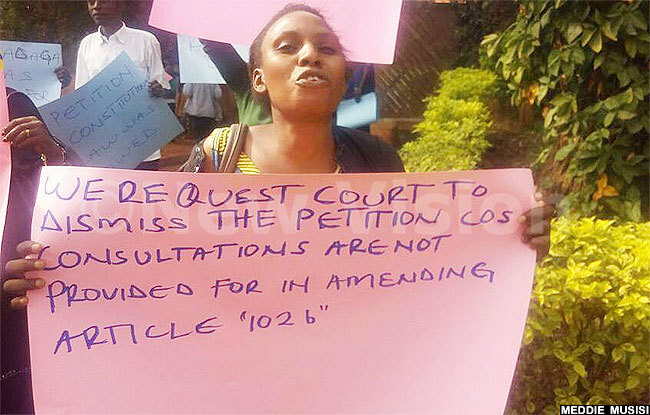 An NRM support, who wants court to dimiss the case, holds up a placard outside court 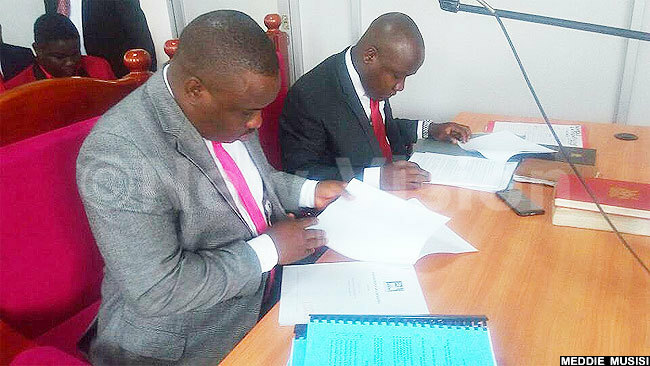 The legal team of the suspended MPs, led by Erias Lukwago (left) going through documents at court on Wednesday

Lawyers representing the Speaker, led by Cherotic Stinah, were also at court. There was heavy Police deployment at the court premises.

The lawyer of the suspended MPs, Erias Lukwago, last week said they intend to cross-examine Kadaga on the way she handled the legislators.

The MPs accuse the Speaker of ordering them out of the parliamentary chambers without giving them a hearing, yet they were discharging their constitutional mandate to draw the Speaker to rules of procedure in relation to representation of the Bill.

They further accuse the Speaker of acting in total disregard of provisions of the law by suspending them,  after she had already adjourned the House, which meant she had ceased to have powers to suspend them.

They want court to declare the Speaker's decision unlawful and set it aside.

Partying into the new year