Two tomatoes a day may keep lung disease a...
Next Story

PIC: Linda, an Algerian mother-of-three, was abandoned by her husband after being diagnosed with breast cancer. (AFP)

As if losing a breast to cancer was not traumatic enough, Algerian mother-of-three Linda was then spurned by her husband for being "mutilated" and a "half-woman".

"Cancer? It's nothing compared with being rejected after 18 years of marriage," the 50-year-old medical assistant said, still clearly upset years later.

Linda is one of hundreds of Algerian women to have been abandoned by their husbands or fiances after being diagnosed with breast cancer, a charity says.

Thousands of women are found to suffer from the disease every year in Algeria, leaving many with no option but to surgically remove a part of their body deeply associated with their feminity.

"He told me: 'I want a whole woman, not three-quarters of one'," the 30-year-old student said, bursting into tears.

Samia Gasmi, the head of a cancer charity, says many women are dropped by their husbands just after they are diagnosed, leaving them alone to face drastic treatment -- and sometimes even without a roof over their heads.

"Some sink into depression," said the head of Nur Doha, which means "Light of Day" in Arabic.

"Others end up in shelters because they have nowhere else to go once their husbands abandon them."

In a country where breast cancer is viewed as a private matter, patients are often reluctant to speak up -- even sometimes hiding it from their own family.

"These women view their illness as shameful," Gasmi said.

One woman refused to tell her own sister, she said, while another started wearing the Islamic scarf before chemotherapy so her husband's family would have no idea when her hair started falling out.

One patient "chose to die with her two breasts rather than accept any removal". 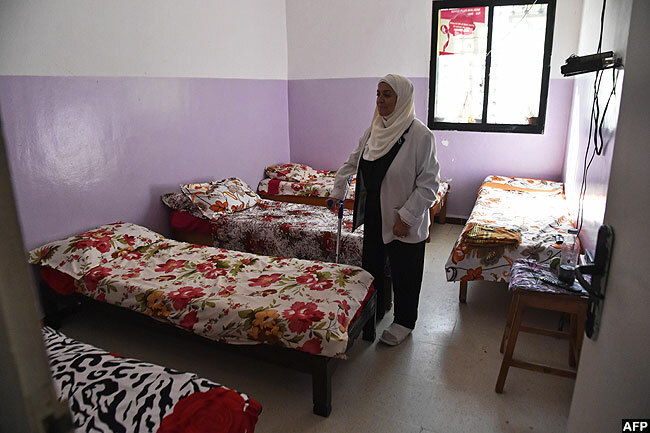 Samia Gasmi, the head of the "Nur Doha" cancer charity, stands in a room of the association's headquarters in Algiers

All women interviewed by AFP refused to appear in front of a camera and refused to give their second names.

Sociologist Yamina Rahou says this feeling of shame comes from the "pain of having a body part that symbolises feminity amputated".

Patients who have had a breast removed feel they no longer fulfil the role society demands of a woman, the researcher at the Social and Cultural Anthropology Research Centre in Oran said.

Theologian Kamel Chekkat, of the Algerian Clerics Association, insisted men rejecting their wives after they have a breast removed is un-Islamic.

"It has nothing to do with religion, it's education," he said.

Islam "urges spouses to support each other," he said, and an honourable man should look after his wife.

But not all men follow the code of conduct.

Saida, a doctor who is now 55, says she met her husband at university.

We "married for love. He even took part in protests for women's rights," she said.

But when she had a breast removed to fight cancer, he sought a divorce and custody of their son even before she had been released from hospital.

To add insult to injury, she said, he cleaned out her bank account.

"I hit rock bottom," Saida said. "I didn't have the energy to fight everything" at once.

Between 9,000 and 10,000 cases of breast cancer are diagnosed a year in Algeria, according to Farid Cherbal, a professor and expert in cancer genetics at the University of Algiers.

That is five times more than 20 years ago, which experts say is due to better means of detection, as well as lifestyle changes such as less physical activity, unhealthy diets and smoking.

Around 3,500 Algerian women die of the disease a year, Cherbal says.

Leila Houti, an epidemiologist and lecturer at the University of Oran's medicine faculty, said breast cancer was often diagnosed too late.

Among the survivors who have become single, some despair of ever finding a life partner again.

"Who will want a woman like me?" asked Safia, a 32-year-old who has lost 10 kilogrammes (1.5 stone) in a year due to chemotherapy and radiotherapy.

But life is beginning to improve for others.

Saida, the doctor, won custody of her son.

Five years after her operation, Hayat, the student, is healing after therapy, breast reconstruction abroad and the support of friends and family.

And Linda, shunned by her husband for being a "half-woman", is in remission and doing well with her children's support.

With hindsight, she said, cancer actually freed her of a man who beat her and stole her salary.