Shilling to appreciate with low dollar demand
Next Story

Cassava and sorghum are grown both as cash crops and food crops.

Cassava and sorghum are grown both as cash crops and food crops.

The growing of sorghum and cassava is boosting the economic potentials and livelihood of the people of Eastern and Northern Uganda.

Cassava and sorghum are grown both as cash crop and food crop in the area, with the major market being the breweries industry.

With time, the production of both cassava and sorghum has increased with support from government under the Operation Wealth Creation programme and private partners aimed at improving livelihood of the people.

Michael Oniro, a resident of Ocikai Village, Otuboi sub-county in Kaberamaido  has been growing improved variety of sorghum since last year.

He uses the money from selling sorghum to pay school fees for his 16 children and has also build a modest house.

He says hos major challenge is that seeds for planting are expensive, yet they sell their produce at low prices after harvest.

Another challenge Oniro and other farmers are facing is pest, disease and strange weed infestation. Oniro said pesticides are expensive.

Paul Okello, a regional agronomist with Uganda Breweries Limited, said they are helping farmers with extension services. He said farmers are faced with challenge of pest and insects destroying crops especially cereals.

"We teach them with proper agronomic practices like crop rotation, applying fertilizer, crop rotation and planting improved seeds," he said. 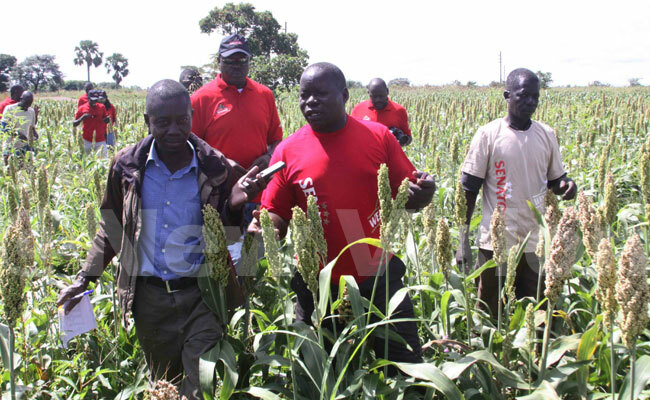 In Apac district, Sam Opio Oceng is a lead farmer with over 100 acres of cassava and a factory for adding value.

He started his farm in 1988 and has 300 acres leased. He started growing cassava in 2010 when he got planting materials from NARO and has since increased to 100 acres.

His factory can produce from five to ten tons of cassava floor per day and employs about 20 people casually.

Opio sells the cassava cuttings to other farmers through operation wealth creation which he said is more paying and the tubers he crush to floor and sell to breweries. An acre of cassava cuttings fetch about sh25m

With his factory and assured market with Uganda Breweries Limited, Opio hope to start buying cassava from the farmers within the community.

"Cassava is major food security, once you have cassava garden, you will never have hunger in your home. Cassava is not like maize or millet that can rot, it can even take two years."

Anthony Ijala, the Zonal Manager of Africa Innovations Institute, the company supporting the growing of cassava production in the regions said they started assisting farmers with means of drying the produce. He said they helped them get solar driers where there are 10 such driers in the country.

Mark Ocitti Ongom, the Managing Director of Uganda Breweries Limited, said they are purchasing cassava, sorghum from local farmers. He said they have contracted over 20, 000 farmers across the country to supply cassava and sorghum.

UBL supply Cain director Shane Healy says Senator beer will remain at sh2,000 so as it remains affordable to ordinary Ugandans because they are using local products

Conte's Inter on a 'mission' to kill off Juventus domination

Return of Serie A: The key questions