S.African troops deployed for state of nat...
Next Story

The president's annual address to parliament has descended into mayhem for the past three years.

The president's annual address to parliament has descended into mayhem for the past three years.

A brawl broke out in South Africa's parliament Thursday as guards exchanged punches with opposition lawmakers who shouted down President Jacob Zuma as he tried to deliver his state of the nation address.

In chaotic scenes, guards in white shirts forcibly ejected about 25 members from the radical leftist Economic Freedom Fighters (EFF) party who prevented Zuma from speaking for more than an hour.

"We have been patient with you, we have been trying to give you an opportunity to express yourselves but... it is being abused," speaker Baleka Mbete told the EFF lawmakers before they were thrown out.

The president's annual address to parliament has descended into mayhem for the past three years as the EFF -- dressed in red workers' overalls and berets -- attempt to disrupt his speech. 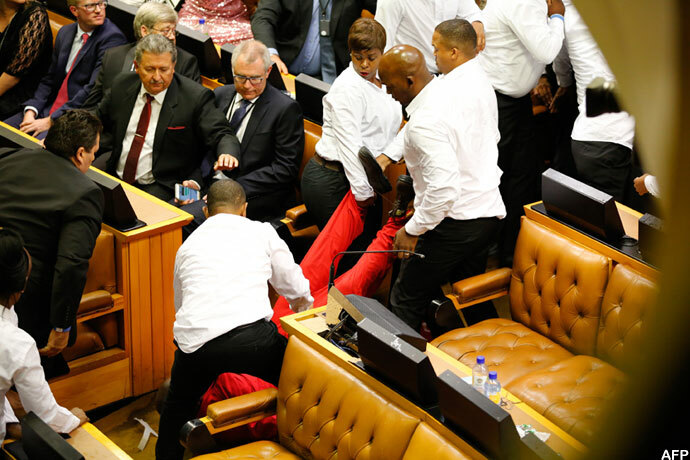 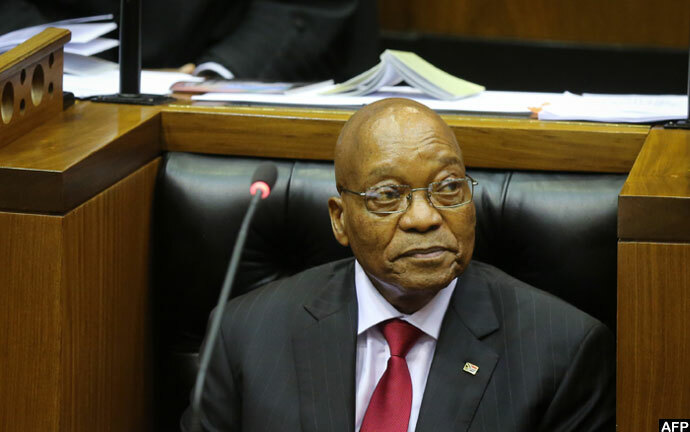 President Zuma appeared relaxed as he watched the drama unfold

Zuma, head of the ruling African National Congress party, appeared unbothered by the violence unfolding in the national assembly and finally took to the podium with his trademark chuckle.

Shortly before the guards moved in, EFF leader Julius Malema described Zuma as "an incorrigible man, rotten to the core".

Malema also turned his ire on speaker Mbete, telling her: "Your conduct has failed you. You are irrational, impatient, partisan."

Many benches in parliament were empty when Zuma finally spoke on Thursday evening after the main Democratic Alliance party also left the chamber in protest at alleged constitutional violations.

A huge security presence was mobilised to stop a repeat of last year when major clashes erupted on the streets of Cape Town.

Inside parliament, speaker Mbete said that pepper spray had been used in the gallery which affected the VIP guests attending the speech. She did not explain how the gas was discharged but promised an investigation into the incident.

Zuma, who is due to stand down before elections next year, used his speech to touch on familiar subjects including land reform, boosting black business ownership and tackling weak economic growth. 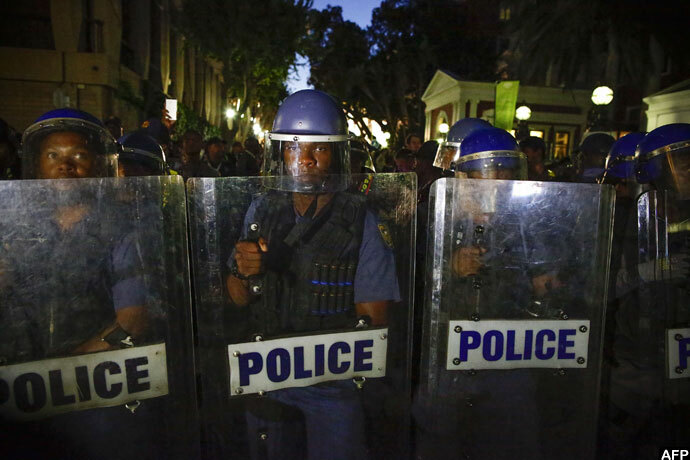 "Indications are that we have entered a period of economic recovery," he said, predicting a 1.3 percent growth rate for 2017 compared with around 0.2 percent for 2016.

Zuma, 74, has faced growing public criticism over a series of damaging corruption scandals, worsening unemployment levels and the weak economy.

In December he beat back an attempt by at least four ministers to oust him, following local elections that delivered the ANC's worst-ever results.

Inflation in South Africa hit 6.8 percent in December and unemployment has risen to a 13-year high of 27 percent.

"You must know that as a nation we no longer have confidence in your leadership," Sipho Mila Pityana, leader of the Save SA action group, said on the eve of the speech.

However Zuma, who was imprisoned on Robben Island with Nelson Mandela under the apartheid regime, retains strong loyalty among many rank-and-file ANC party members and its lawmakers.

The president, a traditionalist leader who came to power in 2009, is widely seen as being at loggerheads with Finance Minister Pravin Gordhan, a reformist respected among international investors.

He is also fighting a court order that could reinstate almost 800 corruption charges against him over a multi-billion dollar arms deal in the 1990s.

A separate probe by the country's top watchdog uncovered evidence of possible criminal activity in his relationship with the Guptas, a business family accused of wielding undue political influence.