Minister Elioda Tumwesigye (R) being shown the plantlets by scientist Hellen Apio during his visit. Photo by Tony Rujuta

Cassava researchers at the National Crops Resource Research Institute (NACRI) Namulonge have asked government to come up with a policy that can help in commercializing their projects. 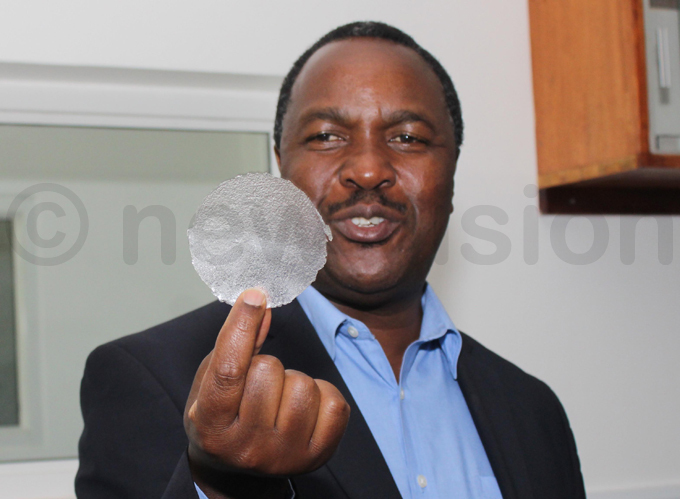 Tumwesigye holding what can be a replacement of plastic polythene bags which is degradable after use and was developed at Namulonge. Photo by Tony Rujuta

Currently the scientists have developed bio-degradable packaging materials from cassava which they claim can easily flood the market but this cannot be done due to lack of an enabling laws to commercialize it.

The scientists were responding to the minister for science and technology Elioda Tumwesigye who challenged them to embrace marketing of their products in order to earn an income from their knowledge.

"I want to challenge you scientists to be marketers of your research findings in order to benefit from your work," he said.

The minister who was on his tour to the institute stressed that technologies developed by scientists within this country need to be developed so as to increase on the agricultural production and also increase the incomes of the scientists.

He observed that majority of scientists prefer acquiring PHDs and publishing their research findings in international journals but lack a marketing plan to market their findings so that they can benefit a lot from them.

He stressed that following the Presidential directive on packaging materials, during kisanja akuna muchezo, President Yoweri Museveni directed that Ugandans manufacture packaging materials, either glass or plastic to package and beautify any products to make them attractive to the market. "The President wants us to package our products in a better way so that our products are attractive since government put a ban on kaveera because of their dangers to the environment," he said.

He observed that now that the packaging materials can be got from cassava while the by products are absorbed in the soil as fertilizers, this he said can easily lead to increased production of cassava to address food security at the same time earn through other means.

Tumwesigye directed the management of National Council for Science and Technology (NCST) to work together with National Agricultural Research institute (NARO) and (NACRRI) to ensure that within two years Ugandans can have packaging materials from cassava.

"You have to ensure that the enabling laws are put in place to safeguard the scientific research findings and also ensure various scientific innovations reach the market so that the public can begin to enjoy the technology" he said.

The minister also promised to support the Bio-Safety and Bio-Technology Bill once brought back into Parliament to ensure that various innovations can be translated into practical issues.

"I used to be among the activists who opposed the Bill because I was ignorant, but now that I have seen that all the innovations are done by our Ugandans from our own products, this gives me confidence that we are safe and we must embrace it first" he said. Dr. Titus Alicai the programme leader Root Crops Research said the innovation is very resourceful in putting into use the bitter cassava which would otherwise be thrown away due to the bitter element.

"We know very well that bitter cassava can have limited use but with this innovation it can be processed and bio-degradable packaging materials are got from it and later turned into fertilizers" he said.

He observed that since the kaveera clogs the water system and is not friendly to the environment, the cassava packaging materials have a huge commercial benefit for farmers who will produce cassava as a raw material.

"We are addressing two different aspects of cassava which is production in terms of yields and production of varieties which can resist virus attacks.

Our focus is to have high quality cassava which can be used as raw material in a number of ways including that which can be supplemented in the making of bread" he said.