MENU
'We only heard their cats'
Previous Story

This campaign was undertaken by Nature and Livelihoods together with NFA and the residents of Najjembe.

This campaign was undertaken by Nature and Livelihoods together with NFA and the residents of Najjembe.

Cleanliness is next to godliness. Najjembe, a popular stopover in Mabira Forest along Kampala-Jinja road smelt of purity after a cleanup.

This was the first cleanup in the last 32 years at the center of roasted bananas and meat that has been under threat of being buried under plastic waste always dumped in the forest.

"These polythene bags and plastics were also affecting the soils which affect the growth of trees and other flora. This exercise promotes good heath to both animals and communities living around the forest," said Dr. William Olupot, the director of Nature and Livelihood, an NGO.

This campaign was undertaken by Nature and Livelihood together with National Forest Authority (NFA) and the residents of Najjembe under a project dubbed 'Mabira Forest Hygiene Campaign'.

Olupot, who also behind the habituation of the rare Mangabey monkey at the forest, said the waste was threatening the animals living in the forest, on top of contaminating various water sources used by both humans and animals. 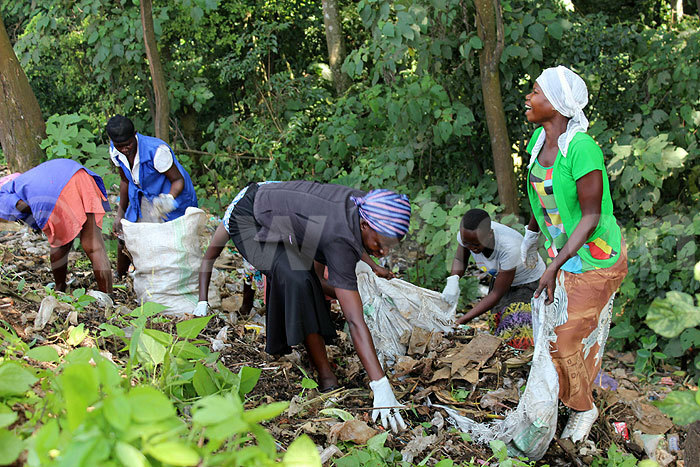 Olupot said this also helps in reviving the green cover in its original form thus boosting tourism in the forest.

Najjembe market is known for its roasted chicken, meat, cassava, gonja (plantain) and fizzy drinks among others, where travellers stop over for a bite. However, most of the waste collected had always been dumped in the forest.

Olupot said the cleanup campaign is aimed at promoting tourism, preserving the forest and safety of animals that forage on the litter which might lead to obstruction of the intestines of the animals.

"Now that we have Mangabey tracking, more tourists are expected but they cannot call their friends in such an environment. That is why we have to change the face of reception because it begins here at Najjembe market," he noted.

Geoffrey Nganda, 66, the chairman of Najjembe market, said the market has 1,050 vendors.

"But we have been having a problem of garbage and NFA management had given us an ultimatum. We thank Nature and Livelihoods for the bunker," he added.

"Reception is important in tourism. We want to change the status of eco-tourists to meet the international standard. We realized we have been losing out because of the hygiene of the market," he noted.

He said they are going to plant indigenous tree species on the sides of the road to the centre to make it more attractive for visitors. 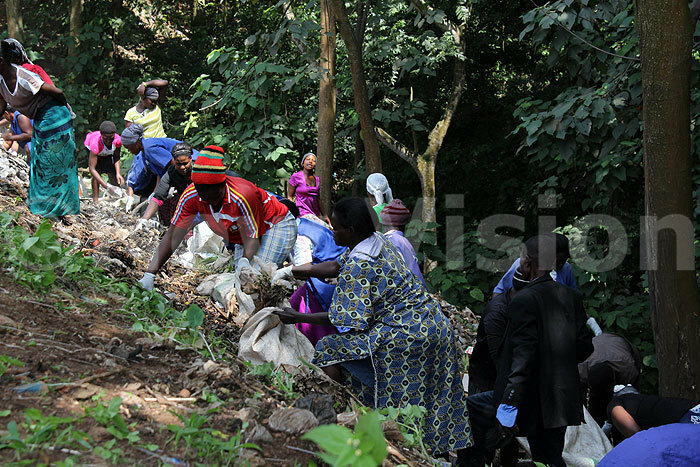 NFA has also established a garbage committee and enforcement team in the market and among residents to make sure no one dumps waste in the forest.

With support from Nature and Livelihood, they also constructed a garbage-dumping ground where the market vendors and residents can collect their waste.

"Forest hygiene is key in tourism. Dumping in the forest leads to siltation which affects the soil, affects water flow and leads to contamination, among others.

The health inspector of Lugazi division, Zam Namwanje, said the division will be using its trucks to collect garbage. "Residents are also being sensitized on how to sort the waste to earn some income. Some of this waste can be recycled."

Sarah Nakatudde, 48, a vendor from Nsakya B village said: "It is going to help us on proper disposal. People have been destroying the forest because they had no option".

Nichodemus Nshimiye, a boda rider at Najjembe stage; "It is good because it's going to improve the hygiene of the area. People have been littering everywhere."