White House to release data on drone strikes
Next Story

A total solar eclipse is pictured from the city of Ternate, in Indonesia's Maluku Islands, on March 9, 2016. BAY ISMOYO / AFP

The sun then went entirely dark in a broad arc right across the world's biggest archipelago nation, which straddles three time zones, before the eclipse swept out across the Pacific Ocean.

Partial eclipses were also visible over other parts of Asia and Australia, and astronomy enthusiasts across the region gathered on rooftops, beaches and in observatories to witness the phenomenon.

Tens of thousands of foreign and Indonesian tourists flocked to the best viewing spots, and special events were organised, from a festival to fun runs and dragon boat races.

"It was spectacular," said Daniel Orange, a 52-year-old American tourist from California, who was watching the total eclipse on the small western island of Belitung.

"It was very beautiful, there are a lot of people here and when the totality hit, everybody cheered. I got goose bumps."

In Ternate, in the eastern Maluku Islands, thousands of people yelled "Glory to God" as the total eclipse became visible, while on the small Mentawai archipelago in the west of the country, hundreds cheered, prayed and hugged one another during the spectacle.

The whole eclipse lasted around three hours in Indonesia, but the total eclipse was visible for between just one and a half and three minutes, depending on location.

The weather stayed clear in many popular viewing spots, although clouds obscured views in some places. 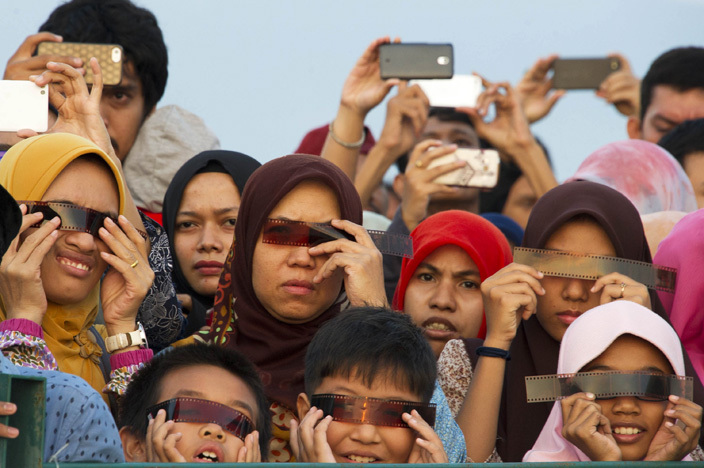 For some of Indonesia's tribes, the eclipse is viewed with apprehension. In Palangkaraya, on Borneo island, Dayak tribesmen performed a special ritual to ensure that the sun, which they view as the source of life, did not disappear entirely.

As the total eclipse hit, the tribal chief -- dressed in a traditional costume -- began to chant loudly and was answered by even louder chants from other members of the tribe.

For many in the world's most populous Muslim-majority country, it was a spiritual experience, and large numbers flocked to mosques to say special prayers.

Foreign scientists also descended on Indonesia. A four-strong team from NASA was in Maba, a small town in the Malukus, to observe the eclipse.

A crowd of about 400 people, including students and families, gathered at a university sports field in Singapore to watch the eclipse, while groups of enthusiasts also converged on beaches and outside their highrise apartments to gaze upwards.

In the Malaysian capital Kuala Lumpur, 1,000 school students witnessed the eclipse at the national planetarium and in the Philippine capital Manila, dozens of people carrying telescopes jostled for space on the roof deck of the country's only space observatory. 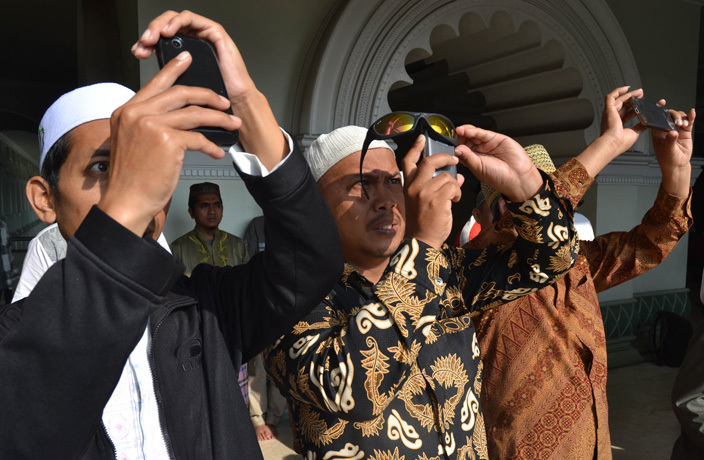 Men watch the total solar eclipse in the city of Ternate, in Indonesia's Maluku Islands on March 9, 2016. BAY ISMOYO / AFP

"People were howling with excitement. For many of them, it's their first time to see a solar eclipse," said Philippine state astronomer Allan Alcaraz.

A partial eclipse was also visible in northern Australia, with a handful of astronomy enthusiasts watching the event in Darwin.

The total eclipse swept across 12 out of 34 provinces in Indonesia, which stretches about 3,000 miles (5,000 kilometres) from east to west, before heading across the Pacific.

It passed over the major islands of Sumatra, Borneo and Sulawesi, before sweeping over the Malukus and out into the ocean.

The last total solar eclipse occurred on March 20, 2015, and was only visible from the Faroe Islands and Norway's Arctic Svalbard archipelago.

Total eclipses occur when the moon moves between the Earth and the Sun, and the three bodies align precisely.

As seen from Earth, the moon is just broad enough to cover the solar face, creating a breath-taking silver halo in an indigo sky.